8 Ways to Prevent your Tree Dying When Pruning

If you have decided to prune some trees in your yard you must bear in mind a few things to make sure you leave your tree in good health after.

There are instances of people having done harm to their trees by not adhering to the best practices. Approaching this job without knowledge about the trees, the right skills and tools could end in you doing more harm than good.

I’ll now take you through a few things you should keep in mind while pruning to prevent your trees from dying. 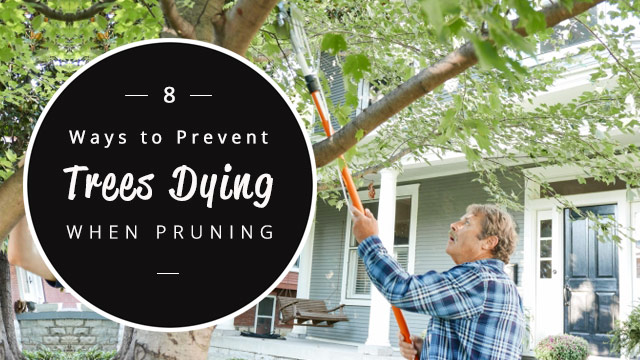 You can cause a lot of harm to your trees while pruning them if you don’t take the necessary precautions about your pruning equipment. As a rule of thumb, you should never use dirty gardening equipment in tree care and management.

They should be cleaned thoroughly to remove any dirt and debris that you see on them. Like in hospitals all the surgical equipment is sterilized once they are used on a patient to prevent infection. The same goes for your tree and your pruning equipment. If you have pruned an infected branch from one tree, then go and prune the next tree which is healthy, you will transfer the infection.

To properly clean your equipment, first, remove all the mud and debris by washing them with water. Then you have a choice of disinfecting products.

These are the most popular disinfecting products for pruning equipment:

You can use just straight alcohol wipes, but some of these products go a little further in preventing corrosion as well.

To get the best results when pruning a tree, you need to time it right. If you choose the wrong season to prune you may put unnecessary stress on your tree which can affect its health long term. The ideal time of pruning a tree can also vary between different species of trees.

As a matter of best practice, late winter is the best time for tree pruning.

Winter is the time when trees are at their most dormant state but at the same time least vulnerable to infections and diseases. After you have carefully pruned your trees you can expect a burst of growth in the following spring. However, you should wait for the coldest part of the winter to pass and temperatures start to rise before you begin pruning.

Tree trimming should be avoided in summer unless you are dealing with a safety hazard such as a dead or decaying branch that is posing threat to life and property. Light pruning can be undertaken during summer, but you should avoid a heavy pruning job and just wait until later in the year.

Summer is also the time when your trees are most vulnerable to diseases and pests. The open portion of the wood can easily contract diseases thus damaging your trees.

If you are a newbie in pruning one of the first questions that you’d have in your mind is how much to prune. If you have done your research on the Internet you may have come across the one-third rule. Herein, you will have to trim 1/3 of the foliage off a tree.

But if you ask a professional arborist they’d tell you that the ideal amount of wood you should remove is around the 25% mark and you shouldn’t exceed the 30% mark in any case. You must bear in mind that we are talking about healthy wood here and in case of dead and infected branches you’d need to take the call based on the condition of the tree and the branches.

So why is this one-third of the 25% rule important? If you become aggressive while pruning and remove too much foliage, there is a good chance that you will hinder the tree’s recovery/growth in the short to medium term.

The amount you remove off a tree will all depend on your motive for pruning, but if you want to reduce the tree’s size by 50% or more, then you are best staggering the prune over 2 or 3 years as to not stress the tree too much.

If it’s too thin the tree out to let more light through, 25% should be more than enough. Smaller saplings can maybe handle a little more as they are a lot faster to adapt to change. You should be pruning them for optimal shape and structural integrity.

Make Use of Sharp Pruning Equipment

As you’d know pruning trees require the use of proper equipment. Using the wrong tool for the job, such as a saw when you need pruners or anything with a dull blade is going to do more damage than good.

If you are undertaking the project yourself you’d need to have cutting equipment such as pruning shears, lopping shears, tree trimmers, chainsaw.

It is important to note that the equipment you are using for pruning should be very sharp as this will enable you to make smooth cuts. Using dull tools can injure the trees and in worst cases trigger infection and diseases. If you are using dull equipment, there are chances that it would rip the bark from the trunk and this exposes your tree to pest, fungi and other pathogens.

The three-step pruning technique has been widely accepted around the world as the best pruning method. The principle behind this pruning method is to prevent damage to the bark and stem.

If you were to just top cut a branch, the weight would snap the branch before you had a chance to finish, tearing the back down the truck opening a large wound.

1) Under Cut – This is the first step in the process where the cut is made in the branches underside first. Cut near the branch collar in such a way that you don’t go through the entire branch and instead try creating a thin notch. This is done to allow for a clean snap when you start your top cut.

2) Top Cut – In the second cut, you will need to move your attention to the top portion of the branch. You should make the cut an inch or two further up the branch away from the trunk. When the two cuts meet the branch will snap and you will be left with a stepped cut.

3) Collar Cut – In the last and the final stage you will remove the short stub that you had left behind in the second step. This is also known as the collar cut.

It is done in such a way that the stub is removed along the bark ridge across the shortest distance from point A to point B. You need to leave the branch collar on the tree.

The branch collar plays a very important role in the structural integrity of the tree and is further pronounced the bigger the tree gets. It also provides a vital role in the healing of the wound left behind when you removed a branch.

Don’t cut off the top of the tree

Cutting the top off of the tree or ‘Tree Topping’ as it is called should be strictly avoided. Many homeowners see it as an effective measure to control the size of the tree.

In some cases, this is fine if you are committed to maintaining the height of the tree(s) such us when hedging, and other large bushy trees. For actual trees though, that have a single trunk and branches coming off them topping can be a problem.

Why is tree topping bad?

Other than it looking bloody ugly, you will permanently retard the tree’s growth. When you remove a branch or other and do not collar cut it, suckers will burst out from the wound like pseudo branches. If left to grow, after several years, they will become quite large and unstable as they are not actually part of the tree, but attached to the tree’s bark.

Eventually, the tree will need to be removed for safety reasons.

Last but not the least, you should always insist on hiring a professional for tree pruning.

Smaller trees like lemon and orange trees are not as big a deal, but for larger trees, it is definitely a good idea.

As you can clearly see from what we have discussed above tree pruning isn’t the easiest of the DIY task that you’d undertake. While killing your trees is not common, making it sick or structurally unsound can be an issue.

Our tree pruning cost guide will give you an idea of what different tree trimming work might cost you when hiring a professional arborist.

Best of luck with your pruning job.