How much Co2 do trees absorb?

We had a reader reach out to us with a question I had never really through about. They asked “How much CO2 do trees absorb?”. As the answer took some time to research and is a little long winded, I thought I had better create a post for anyone else wanting to know.

When discussing CO2 absorption by trees, it’s important to remember that elemental carbon locked within the tree differs from carbon dioxide absorbed from the atmosphere. We should note that not all trees absorb the same amount of CO2. 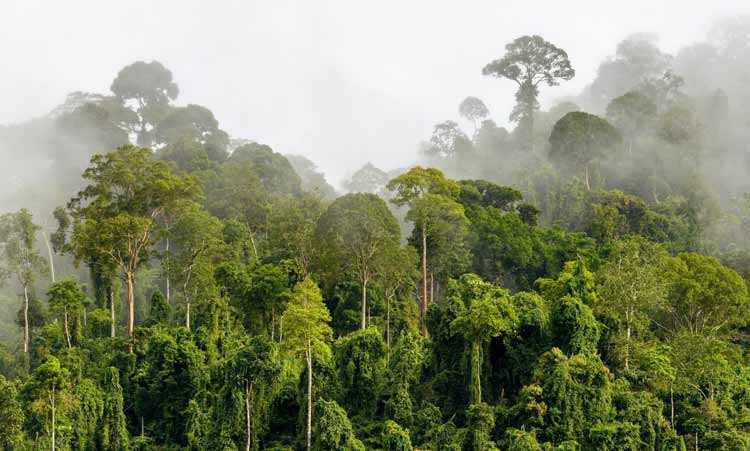 The quantity depends on several factors such as the height of the tree, the amount of foliage and of course the species of tree. An oak tree for example will absorb more than a cactus. Among tree species though, two stand out from the rest for their absorption capabilities…. But you’ll have to keep reading to find out what they are.

The average Pine tree absorbs about 10 kilograms of CO2 per year. Assuming that the standard measurements of tree plantings is about 1000 trees can be in one hectare. If a tree absorbs 10 kg per year, the acre will absorb a total of 10,000kg or 10 tons per year.

What trees absorb the most CO2?

All plants and trees have the ability to absorb CO2, but some absorbs more than others. Below is a list of trees that absorb the most CO2: 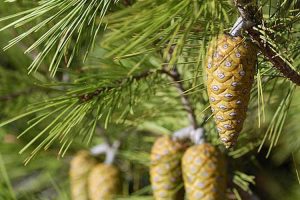 The first is the Aleppo Pine which can absorb almost 50 tons per year. It’s considered that with 100 trees located in a city, they can absorb Co2 from 103,730 vehicles in the area. Therefore, 100 trees would be able to absorb virtually all Co2 from a small town. 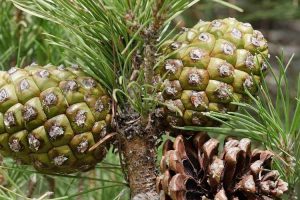 The second is the Stone Pine; it can absorb approximately 27 tons. Generally, pines are prevalent in cities for reducing air pollution. Its capacity is for about 500,000 vehicles in an urban area.

This tree has fewer leaves and their size is smaller than the Aleppo Pine, causing the absorption of little more than half. Its capacity for carbon intake and air purification is common knowledge today. 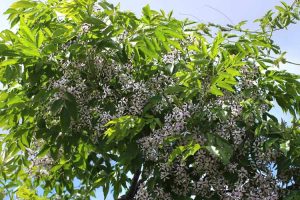 The third is the Chinaberry tree; the most common tree in urban areas has a potential absorption of almost 10 tons of Co2 per year. According to a study carried out by a university in Seville, ten trees per street decrease the Co2 levels from approximately 7 vehicles.

Parks with these trees tend to have very low temperatures, even in the middle of highly-populated cities. 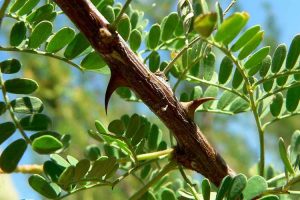 The fourth is the Acacia. They are very common in rural areas with a capacity of 5 tons per year. The Acacia is a widespread choice of tree in urban parks and walks.

Studies show a significant decrease in both carbon dioxide and nitrogen in the environment where these trees are planted. The results show a reduction in air PH, being more alkaline and less acidic. Toxic gases create an acid PH, which is the primary source of diseases, such as cancer.

Another quality is its carbon storage capacity for large amounts. It is a double-edged sword as it is quickly released when the tree is pulled down. 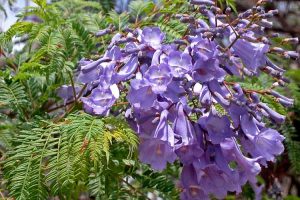 The fifth is the Jacaranda, a frequently seen tree in walks and parks. It can absorb approximately 5 tons of CO2 per year. The Jacaranda stores a significant amount of carbon despite not being a large tree.

It is a tree that lives a long time, taking care of itself correctly, and in urban plantations, it can absorb the gases of vehicles.

How many trees to offset 1 ton of Co2?

The number of trees corresponds with the type of tree and the measurement time. A Melia tree can absorb 0.04 tons daily. To absorb one ton per day, approximately 25 trees are required.

In the case of the Aleppo pine, which absorbs 50 tons per year; an average of 1 ton per day requires eight trees. On average, a Pine tree can absorb 0.13 tons per day, in which case 8 trees absorb 1.04 tons/day.

The Stone Pine requires a slightly larger quantity than its colleague Aleppo. This pine can absorb an average of 27 tons per year, which leads to 0.07 tons per day. It takes 14 trees to consume approximately 1 ton.

What matters the most is the tree’s size. Reasonably, larger trees are older and older trees have absorbed more CO2 than their younger counterparts. You can measure their size by noting its circumference.

You can calculate the carbon content by measuring the tree’s girth; use a tape measure on three different sections of the tree and get the average. You can use the tree’s girth to measure its dry weight; the ratio is easy to find online.

Carbon makes up half of the dry weight of a tree, so you can then divide your result by 2 for the result you’re looking.

If it’s too much, you can also use this calculator.

How much Co2 does a redwood absorb in a lifetime?

Redwood is one of the trees with the highest carbon dioxide absorption capacity and it is capable of decreasing air pollution.

Studies show that a Redwood plantation can absorb carbon dioxide from 2,700 vehicles in a year. One has to be careful with its deforestation as it releases a large amount of carbon dioxide when cut down.

Companies and foundations carry out studies and donations for planting acres of this tree. Its farming caused a significant decrease in the level of carbon dioxide in the surrounding areas.

The removal of trees in suburbia should always be avoided. Not only do they clean the air, but they also reduce the heat island effect which in turn saves you money on air conditioning costs in summer. But but if it can’t be avoided, I urge you to contract the services of a local certified tree arborist and not a regular gardener or landscaping company. Trees are very dangerous to remove and getting the right company for the job with the correct equipment and insurance is critical.

Why is Tree Pruning Important? When Should Trees be Trimmed When Should I Prune my Oak Tree Best Time of Year to Trim Trees Should Trees be Pruned? 7 Reasons you Should Prune Trees Palm Tree Trimming Cost Tree Branch Removal Cost Can I Trim a Street Tree? Prevent Tree Dying When Pruning Tree Limb Removal Cost How Often to Trim Trees Hiring a Tree Surgeon Consulting Arborists Tree Cutting Services Near Me