How many trees are in the world?

In a time when the world is experiencing the devastating effects of global warming and deforestation, trees have left has never been more relevant.

Globally, there are estimated to be 3.04 trillion trees. This is according to a study published in the journal Nature. This means that there are roughly 422 trees for every person on earth.

With our current rate of deforestation and at the same time a large number of tree planting initiatives, that number is expected to stabilize over the coming decades.

How many trees were there before humans?

There were an estimated 6 trillion trees or roughly double the number of trees there are today. Before the dawn of man and civilization, most historians estimate that the world’s forests took up around 6 billion hectares of land. Today, only a fraction of that remains, with the forest cover in the world down to approximately 3 billion hectares.

This loss can be attributed to the intensive agricultural practices and modern civilization infrastructure. Annually, the world loses nearly 10 billion trees each year.

How many trees were there 100 years ago?

About 70 million trees. The early 1920’s defined an exponential growth in the timber industry due to the developments that were happening in the construction and recreation industry. This made it one of the key drivers for deforestation in the US.

With no realistic forest management laws and programs in place, the country (especially the East coast) experienced a massive forest cover loss.

It’s estimated that nearly two-thirds of the American forests were logged without replacement during this period.

Why is Tree Pruning Important? When Should Trees be Trimmed When Should I Prune my Oak Tree Best Time of Year to Trim Trees Should Trees be Pruned? 7 Reasons you Should Prune Trees Palm Tree Trimming Cost Can I Trim a Street Tree? Prevent Tree Dying When Pruning Tree Limb Removal Cost How Often to Trim Trees Hiring a Tree Surgeon Consulting Arborists Tree Cutting Services Near Me

Are there more trees now than 100 years ago?

Surprisingly, Yes! Despite experiencing a 400% increase in the use of trees, most countries worldwide have been able to utilize proper forest management to improve tree growth.

According to the Food and Agriculture Organization (FAO), the forest growth rate in the US has more than quadrupled between today and 1920. The majority of this growth has been happening on the East Coast, where the number of trees in the area has doubled within the last 70 years.

Currently, governments around the world have initiated different tree conservation programs that help protect the trees available. The creation of national forests in the US, such as the two National Forests in Alaska, has also helped minimize tree cutting.

Countries with the most trees

While a whopping 3 trillion trees give you something less to worry about, their distribution around the world is the biggest issue.

Nearly 50% of the world’s forests are found in the 5 biggest countries; Russia, Canada, Brazil, the USA, and China, while almost two-thirds of this stems from ten countries, including; The Democratic Republic of Congo, Indonesia, Australia, Peru, and India.

The table below shows the tree distribution among the top ten countries.

This data shows that the larger the land size, the more likely a country will have more trees. 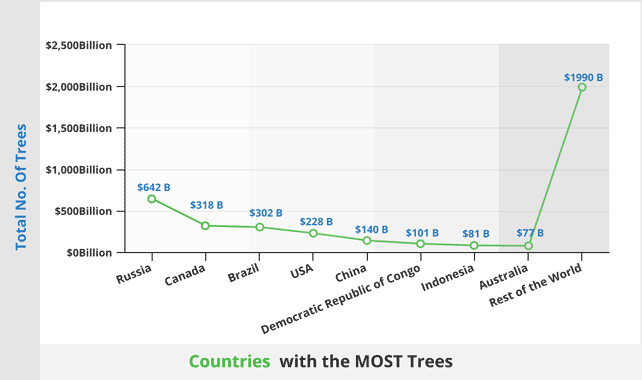 Countries with the best Tree density

Besides the tree total numbers, we can also measure the ‘tree wealth’ of countries using their tree density. Tree density refers to the number of trees per square kilometer of the country’s total area.

Finland, Sweden, Slovenia, Bolivia, Equatorial Guinea, French Guiana, and Taiwan take the lead. On the other hand, desert countries such as Qatar, the United Arab Emirates, and Greenland have almost zero tree cover.

How many trees per person in the world?

Another way to estimate ‘tree wealth’ is through the number of trees relative to the population. With the world’s average at 422 trees per person, countries with the best tree per person ratio includes Canada, Russia, Gabon, Bolivia, Guyana, and the Central African Republic.

This metric model proved to be sensitive to the population of the countries. For instance, a country like India with slightly over a Billion people and around 36 billion trees recorded around 30 trees per person.

On the other hand, smaller countries like Guyana and French Guiana, with less than a million people, record about 20,000 trees per person.

Based on a study by the Center for Global Development, the world is set to lose more than a million square miles to deforestation by 2050 if we keep walking on the same environmental path.

Moreover, with the population of many major cities projected to increase, the demand for more land, agriculture, and forest products may increase deforestation, especially in middle-economy countries.

By 2050, some small and middle economy countries may have less than 1% of forest cover.

In terms of numbers, the world total may fall to around 2 trillion trees – which may seem adequate, but it’s a big reason to worry for future generations.

On the brighter side, the total number of trees can also increase by 2050, with the right policies in place.

As of 2020, the rate of deforestation has drastically fallen in most countries thanks to the numerous policies in place. There has also been a huge global tree awareness campaign, e.g., The Trillion trees vision and the 60 Billion trees campaign by 2050, in the US.

If these campaigns are successful, and governments continue to tighten on their deforestation rules, the world might actually see an increase in the total number of trees in 2050.

Are we running out of trees?

Not really. Even though the world loses around 10 billion trees each year, more countries have adopted tree replanting initiatives that ensure the survival of trees for years to come.

Now more than ever, more people and companies are planting more trees than they are harvesting.

Given that countries like the United States have experienced an increased number of trees compared to 100 years ago, we might actually have more trees than we’ve had over the last few centuries.

Nevertheless, this isn’t to mean that it’s impossible to run out of trees. Some studies still indicate that the world is losing trees faster than ever. As the demand for timber skyrockets, we might actually run out of trees within three centuries unless we don’t uphold strict deforestation rules.

What percentage of trees is left in the world?

Around 50%. Compared to the times with no human civilization, the number of trees in the world has decreased by half. This covers only 30% of the earth’s land.

Besides deforestation, natural factors such as Wildfires are also taking a toll on the total number of trees in the world.

Take the Australian Fires, which occurred earlier this year. The fires ravaged approximately 21% of the trees in the country. The Amazon forest is also no stranger to wildfires, having registered more than 44,013 fire outbreaks in 2020 alone.

About 7 billion trees. Planting trees to help alleviate the impacts of climate change was pretty much the theme for 2019. There were thousands of organizations, events, and causes that sought to help plant as many trees as possible.

In the US alone, the country planted more than 5 million trees over the year across 18,000 acres of the National Forests.

Countries like Ethiopia almost made a Guinness World Record with their 4billion tree planting initiative when they tried to plant 200million trees in a day. In slightly over 12 hours, the country reported planting 353,633,660 trees – which was 100m trees more than their target.

In the UK, the government reported planting over 3,281,000 trees across a 1,956-hectare piece of land. For Brazil, more than 4.7 million trees were planted to help recover the forest cover lost from fires.

With most countries setting tree planting initiative goals for 2030 and 2050, we can expect even more trees to be planted in 2020 and the subsequent years.

What if we planted a trillion trees?

The more trees we can plant, the better we’ll stand against global warming. A trillion trees would play a key role in cleaning up our atmosphere by sucking out over 750 billion metric tons of heat-trapping carbon dioxide.

What country has no trees?

There are four countries that survive without trees: Qatar, Greenland, the Faroe Islands, and Haiti. You may, however, find the occasional shrubs and some grass in these environments.

How long until we run out of trees?

Approximately 300 years. At this point, there’ll be so much demand and pressure to find space for more people and their agriculture, forcing them to cut down any of the trees on their way.  However, it’s highly unlikely that the earth will run out of trees.

Author: Ben McInerney – Ben is a qualified arborist with 15 plus years of industry experience in Arboriculture. He ran a successful tree service before turning to writing and publishing. Ben is dedicated to providing users with the most accurate up-to-date information on everything trees.

FEATURED AND TRUSTED BY: