Drought-tolerant trees take a few years to grow, depending on their size and species, but once they’ve established a strong root system, they don’t need much water. They require little to no more water unless there is a severe drought.

Let’s dive deep into this and know more about these trees. 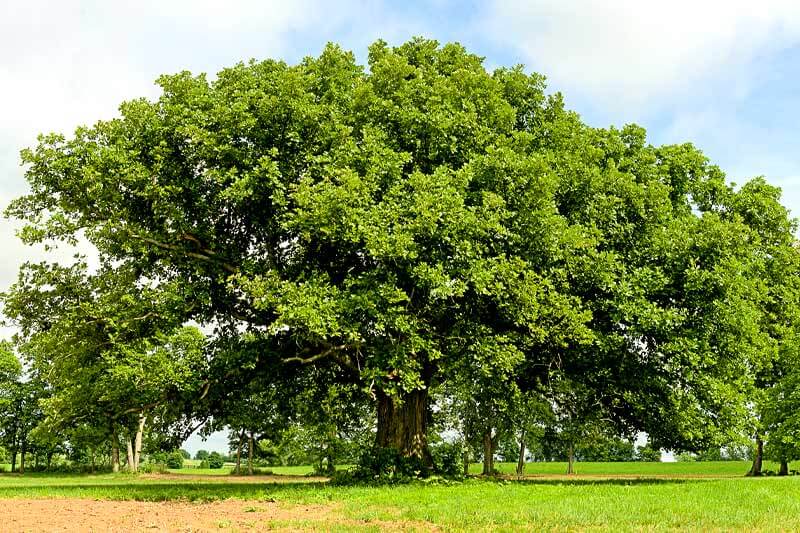 The Bur Oak is like a superhero for your lawn, with sturdy branches, deep roots, and a dense shade-protective canopy, the Bur Oak is the perfect drought-tolerant plant.

It’s a huge, fast-growing plant native to the Great Lakes region that’s appreciated for its winter hardiness, pest and deer resistance, and capacity to survive in poor soil. Bur oaks can survive for 200 to 300 years once established.

Spring is the best time for blooming which produces mossy, chestnut-like acorns, and beautiful squirrels, rabbits, and chipmunks rely on for sustenance. If you want to plant an environmentally friendly tree, Bur oak is the tree to choose. 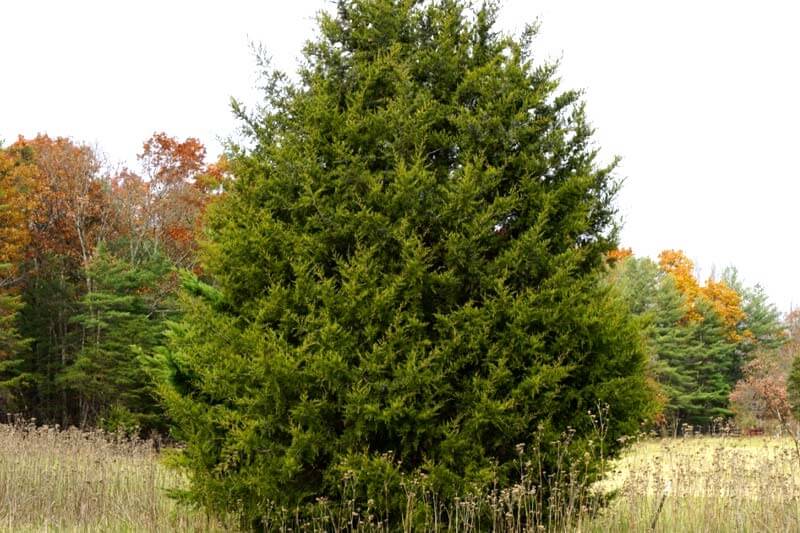 The Eastern Red Cedar may be appealing to you if you reside in a dry area along the East Coast. Among the conifers native to the eastern United States, this dense evergreen resists drought the best.

Eastern red cedars, with their pyramidal structure and dark green and blue needles, are lovely display plants for your front yard, or you may plant clusters of them as windbreaks and privacy screens.

These trees are also strong enough to tolerate salty, nutrient-depleted soil. In addition, they attract natural butterflies, songbirds, and bees.

Bigtooth Maple is a fast-growing deciduous tree with outstanding red and orange colors in fall. It usually matures at 10-15 ft or sometimes taller. It has a dark-brown scaly bark and branches that are stout and erect.

The thickish, three- to five-lobed deciduous leaves turn bright red and gold in the fall. It is usually small to medium-sized with a short trunk and spreading round and dense crown; often looking luke a shrub. It has great drought-tolerant tendencies and is native to Texas. 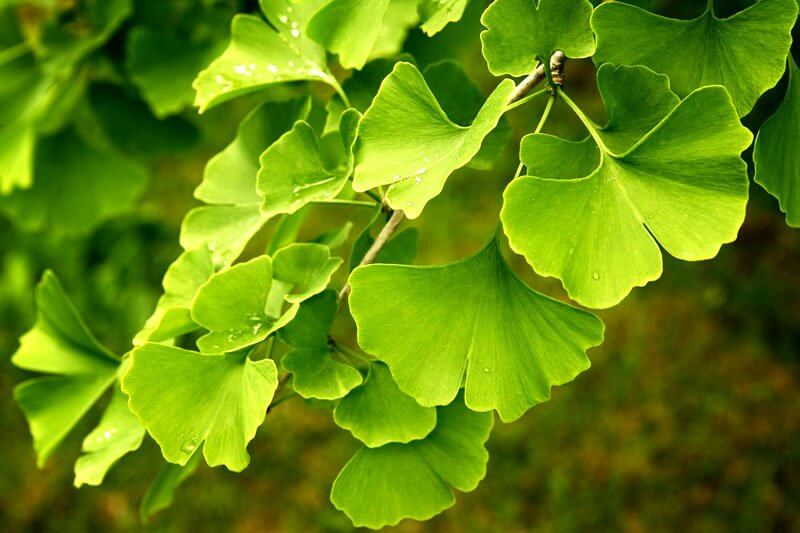 Maidenhair trees (also known as ginkgos) are the world’s oldest surviving tree species: The species is so well suited that it has survived prehistoric eras to reach modern times. Ginkgos are beautiful additions to children’s gardens, huge backyards, and broad walkways, with sweeping fan-shaped leaves that turn gold in the fall.

The most noteworthy aesthetic trait of this ancient drought-tolerant tree is its fall colour, known for the exquisite fan shape of its leaves.

The “fruit” produced by this tree is a smelly, slippery nuisance, meaning that they don’t make good street trees, but that doesn’t mean they aren’t the best. Because of their resistance to car pollution, smog, and road salt, these living fossils make ideal city trees and the best drought-tolerant trees.

It’s no surprise that this summer-blooming shade tree has a name like the golden rain tree. Yellow star-shaped flowers are a wonderful welcome to the warm season, attracting lovely butterflies and bees, and when the flowers fall to the ground, they are like a magnificent golden rain shower.

This robust, fast-growing plant is ideal for both urban and open terrain. It can withstand drought, as well as deer and pests, disease, heat, pollution, and strong winds.

Plant a golden rain tree near your patio or playground in a sunny location, or plant a few near the street as traffic noise buffers. You can harvest its flowers for a lovely dry flower display if you’re feeling crafty. 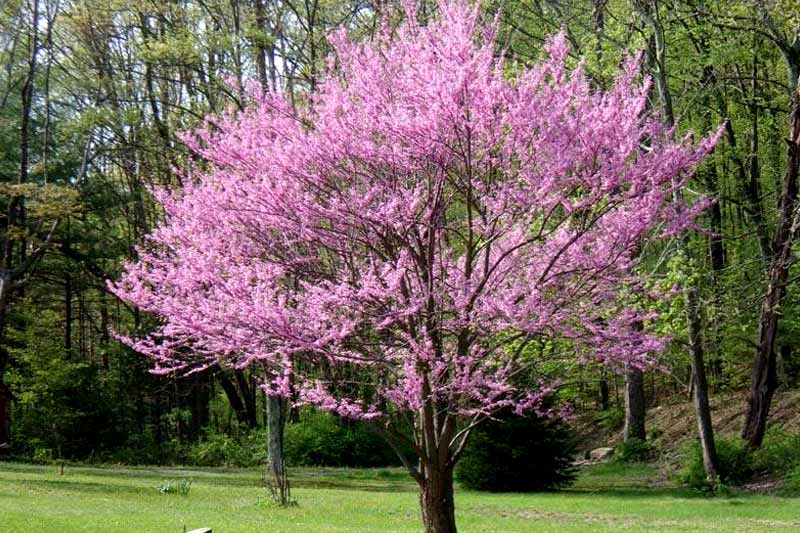 Eastern redbud is a shade-tolerant powerhouse native to North America, which means it’s suited to a wide range of soil types and climates, and it attracts native wildlife like hummingbirds, honey bees, butterflies, and songbirds like the rose-breasted grosbeak. 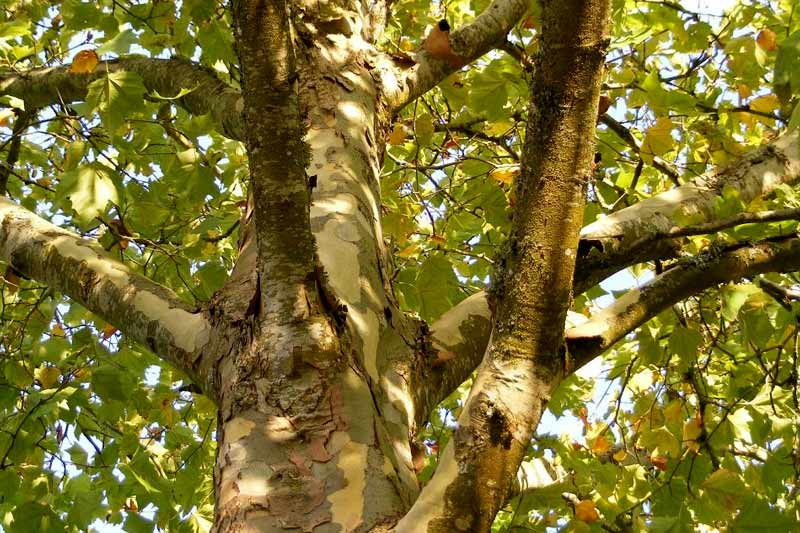 Star-shaped leaves are a wonderful welcome to the warm season, attracting lovely butterflies and bees, and when the flowers fall to the ground, they are like a magnificent golden rain shower.

This tree is worth admiring despite its reputation as a survivor. Summer or winter, the distinctive bark, and intriguing branching offer it remarkable visual appeal.

The tree grows well in the smoky air and provides excellent shade. Its ability to endure pollution, drought, and other adversities contributes to its widespread use as an urban tree. 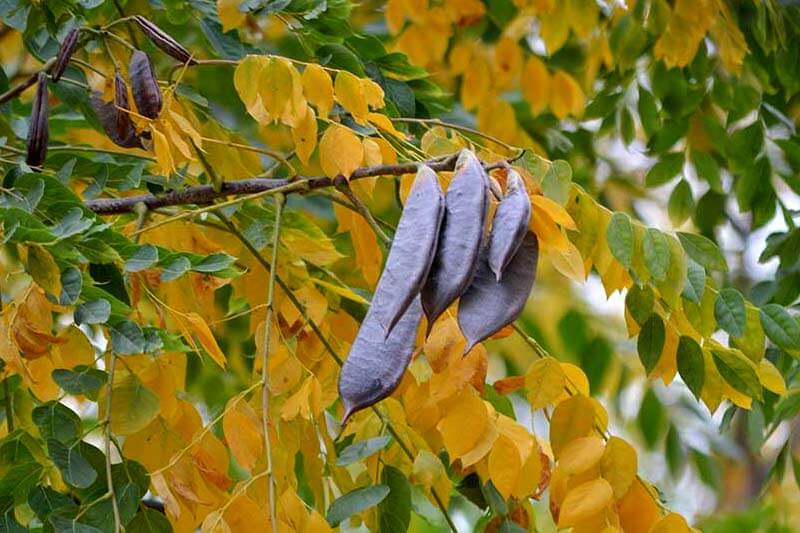 Kentucky coffeetree holds tough against pollutants and looks lovely doing it, with fragrant white flower clusters that bloom in the spring.

Although this medium-sized bean matures slowly, don’t underestimate its strength. The Kentucky coffeetree is disease-resistant and pest-resistant. It grows a striking, broad canopy that provides plenty of shade. Adaptable to a wide range of soil types.

The Kentucky coffeetree is a wonderful choice for parks, golf courses, and other vast areas because of its reputation as a resilient species. This tree is commonly used as an ornamental or street tree in cities.

Despite being exposed to wind, snow, and scorching heat, these magnificent West Coast native trees grow tall and live for over 700 years.

Ponderosa pines are well structured in such a way that they are perfectly adapted to handle long dry spells. Their tall trunks, thin branches, and water-saving needles make it the best drought-tolerant tree.

In the spring of the first year, these trees produce little reddish-purple cones known as ponderosa pine cones. These come to maturity and drop their seeds, providing food for chipmunks and squirrels. 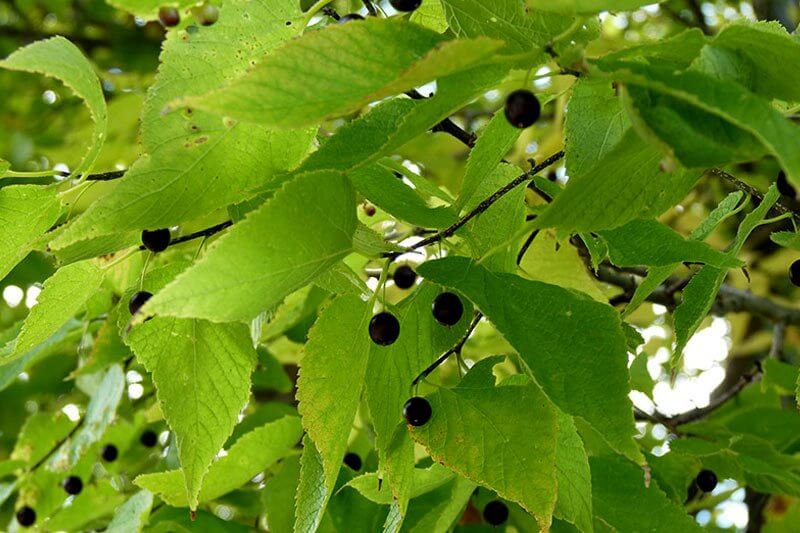 Hackberry is a popular choice for city backyards and boulevards because of its attractive vase-like shape and rounded top, making it a popular choice. Hackberry is a huge deciduous tree that grows quickly and thrives when other trees fail. As it has a slender trunk and smooth silver-grey bark with ridges which makes it damage-resistant wood and a strong tolerance for heat, frost, wind, and salt spray.

Hackberry leaves turn a lovely brilliant yellow in the fall, and the berries linger on the tree until birds devour them. Its deep purple fruits appear in the fall and last into the winter, attracting squirrels and birds such as robins and cardinals, as well as flickers and cedar waxwings. 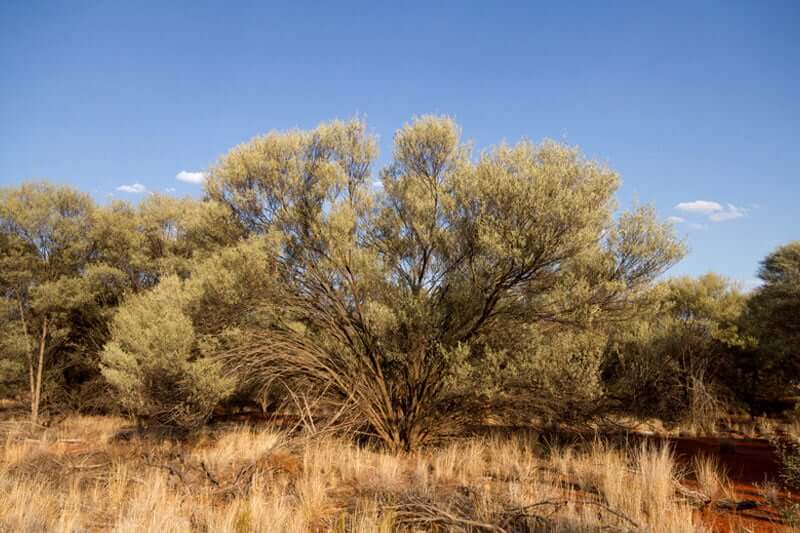 The giant mulga, native to Australia’s deserts, is a perfect fit for hot, dry climates. Mulga is a slow-growing evergreen tree with silver needles and vivid yellow caterpillar-like flowers that bloom in the spring.

If you are thinking of taking it home, plant it as a beautiful accent tree in your front yard, near your patio or pool, or as a privacy screen with many mulgas.

Mulga has a secret superpower: it’s a nitrogen-fixing legume, which means it can withstand poor soil while also enriching the soil for the plants surrounding it.

Before you go crazy for them make sure you live in a place where mulgas can survive perfectly because they can’t survive in a temperature below 20 degrees Fahrenheit. 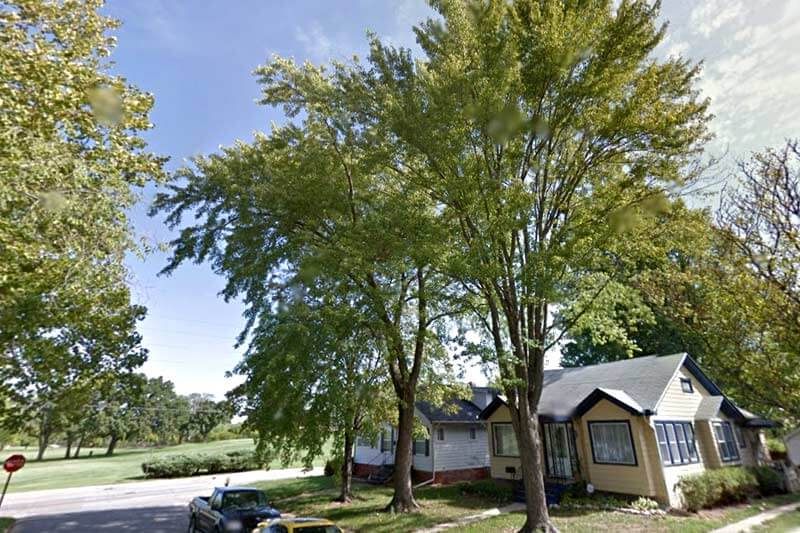 Hummingbirds love lion’s tails, as they are sweet in taste. Dr. Seuss-inspired plant with tall stalks of weird orange tubular flowers that resemble fireworks on a stick or a stack of bright orange sparklers.

These South African indigenous seem to flourish in hot, sunny places in Southern California gardens. They’re like a member of the mint family, so they spread readily, and even when the flowers have dried, they bring interest to the garden.

The amount and frequency of watering will vary depending on the type of tree you plant, but here are some general guidelines for watering your new plants.

Most of these trees will thrive on natural rainfall, after two and three years of strong foothold. These plants grow easily as soon as they get their roots properly. So you can toss the hose aside and enjoy beautiful summer foliage without the water bill.

Before ditching the hose, you should check the watering needs of trees or plants because every species has different needs and some trees can take as long as nine years to establish.

Instead of going to the garden center and picking whatever looks good and is in bloom, start by looking around your neighborhood to determine which plants flourish without much care.

Your local survival plants will thrive without difficulty. Encourage them to thrive in your garden by studying the conditions they prefer and planning your planting around them.

A pot-grown plant produces roots that spread freely in all directions at first. When the roots reach the pot’s sides, they begin to grow inwards, twisting around until they form a firm knot.

Drought tolerance will be a challenge for the plants, as they must reach deep into the soil to find moisture under these conditions. Don’t purchase rootbound plants elsewhere.

Planting in the autumn allows trees to have an extended growing season before the summer heat. While you plant in the fall, the risk of drought also sets in.

Cooler temperatures and rain in the fall allow trees to grow their roots, making it simpler for them to adapt to high heat or drought in the summer. Before it gets cold in the fall and early in the spring, plants put on a remarkable amount of root development.

Even if there isn’t much foliage growth above ground in the first few months, the root system will be expanding naturally to form strong foundations.

Keep in mind while watering

After planting you need to water your newly established plants for the first year, and do it sparingly but frequently by filling the large watering basin you’ve dug around it.

Although water plays an important role to attract the roots downwards, the water must generate a patch of wetness deep in the ground, seeping through to well below the root ball.

The root system will be developing and branching to make a strong foundation. Hence, be aware while watering the trees.